In our new blog series, Alumni Life Hacks, we ask one of our alumni how life is treating them after their time at AMS. How did they develop themselves, how is AMS still playing a role in their lives, what are their dreams for the future and what can they advise to other alumni? For this edition, we spoke with Stefan Lossy, who took our Master’s in Personal Financial Planning and is a founder of its new alumni club ‘Finclub’. We’re curious to find out where he gets all his motivation.

Stefan Lossy runs his own law firm, Lossy Advocaten. Because he has his own office and works with freelancers, his colleagues think he’s quite atypical. He was one of the oldest of his group when he decided to participate in the Master’s in Personal Financial Planning in 2015. “I’m in company law. I noticed that it’s mostly the same thing happening over and over again. You always meet the same lawyers and end up in a vicious circle: meetings, litigations, helping clients, building up cases, working on strategies. That’s why I wanted to broaden my horizon a little bit.”

"My firm does not have to keep growing, but I want to continue growing when it comes to knowledge and experience.”

Next to all that, Stefan noticed that people in companies started asking for more advice. “At the end of the line, the SMEs I was helping had questions that I could not answer. My firm does not have to keep growing, but I want to continue growing when it comes to knowledge and experience.” He is very positive about the master’s: “The real advantage of MPFP is that it’s not just juridical, but also economic. Prof. Dr. Marc De Ceuster’s investment course was especially interesting. He can really turn something difficult into something easy to understand. I enjoyed that.”

Stefan’s professional career has its roots in social law. A good lawyer has to be a good negotiator, Stefan thinks. “The procedure is a necessary evil. Negotiating is all about making people look in the mirror, relativizing everything and putting everything in order when it comes to interests and possibilities.”  That’s why Stefan already took some negotiation classes before negotiating was of any importance. “As a lawyer you cannot simplify your profession and say it’s only about pleading. To me, pleading – or a procedure – is just an instrument to get to an agreement. What I do is conflict management with the goal of getting to an acceptable agreement.”

"When you study as a twenty-year-old you want that diploma, the pressure is very high. Studying for an exam is something else than studying because you’re interested.”

Studying when you’re a bit older is not the same as studying while you’re young, Stefan says. “When you study as a twenty-year-old you want that diploma, because you’re nothing without it. The pressure is very high. Studying for an exam is something else than studying because you’re interested.” However, Stefan knew from a young age that he’d walk this path. “I already knew I wanted to be a lawyer when I was ten years old. I had it easy in the sense that I knew that very quickly. I never had to think about it. However, I did not fully plan my career.”

The best thing about his profession, according to Stefan, is helping his clients during a general meeting. “If there is a conflict between the stakeholders or with a manager, the client reaches out to me. But that client usually does not have a ‘case’. The best way to build that case in a company is by letting the departments – the general assembly, the board of directors – of that company do their jobs and reporting on that. But then the question arises: how do you put that to paper? That calls for specific knowledge and that’s when the clients call on me.”

Flamenco: ode to the avonturer

Lately Stefan also started looking for inspiration outside of his firm. “These days I spend quite some time in Mexico. My dream is to move there and work as a consultant or lawyer, without cutting my ties with Belgium.” 38 years ago, Stefan met his Mexican wife during a language course in Hastings, England. “I was there to perfect my English and to meet young people from other countries. That was when I finished high school and was going on to university. After the course we both went our own way, but a couple of years ago we met again and now I frequently visit Mexico.

"My dream is to move to Mexico and work as a consultant or lawyer. I’d have to study for at least two more years. That’s a challenge, but the day you stop investing, is the day you quit.”

Stefan especially loves Mexico’s rich culture. “Diversity to me is such a source of inspiration. Adapting your own ideas by seeing how other cultures look at certain things. Flamenco music grabbed my attention long ago, which inspired me to start playing the flamenco guitar. In flamenco I’ve seen the impact of communication and the importance of being on the same wavelength. During my pleas I use those insights to come into contact with the magistrate, with the public. Communication is key.” Stefan is definitely familiar with the term ‘lifelong learning’. “One of my dreams now is to get a law degree in Mexico. I’d have to study for at least two more years. That’s a challenge, but the day you stop investing, is the day you quit.”

Stefan recently became the co-founder of alumni club Finclub, focused on personal growth and knowledge sharing, with the goal to maintain acquired knowledge and contacts. “The idea actually started at a barbecue after graduation”, Stefan says. “During the toast I suddenly thought: ‘What if we’d get together from time to time and invite someone who knows something and wants to talk about it.’” And so he did it. “We founded a non-profit organization and organized our first event on the May 8. It was a real success.”

However, the most important lessons in life are not always the easiest. Stefan only has one solution for darker periods: ‘disconnect’. “Often, people focus too much on the problem, which makes them blind for everything else. That’s what I tell all my clients: take a step back. Where do you want to go with that conflict? Then you often see that people are only in a conflict because they can’t let go of the conflict and because they can’t let go of a part of themselves.”

“Often, people focus too much on the problem, which makes them blind for everything else. That’s what I tell all my clients: take a step back."

He pays close attention to not getting lost himself. His inspiration is lawyer Jos van Goethem (solicitor general of Antwerp). “What I respect in him is his sense of perspective. He was also a very wise man who could summarize the essence of a problem concisely. That’s also a part of ‘learning how to put things in perspective’.” Stefan finds happiness in the smaller things in life. “What can make me happy, for example, is working on a juridical question. Not because you can earn money by doing so, but because I find happiness in the case I’m working on.” 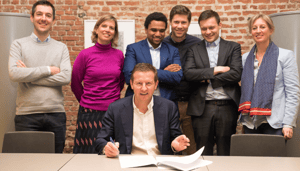 Stefan wants to emphasize enjoying ‘the things an sich’: “Your best realizations are the things that took you the most effort. It doesn’t just happen, do what you love and do it passionately. Then it’ll be alright.”

Actualia Pensions: "Don't depend on whimsical political decisions or an uncertain pension system"

Finclub is the recently founded alumni association of the Master in Personal Financial Planning (MPFP). The association’s goal is to strengthen the bonds between AMS alumni, especially those of MPFP. On May 8, we had our first event on 'Actualia Pensions'. With more than 30 enrollments, ...

Financial operations in the business world may be a bit of a challenge, especially for people who are not familiar with finances. That is why Antwerp Management School has developed the BENE program: Business Economy for Non-Economics. This nine-day program introduces you to the financial ...

"Now I really understand how my organization is doing from a financial point of view."

Theo van Leest is owner of the Digital Legit Company. DLC helps organizations to tackle the challenges of IT projects and understand their impact on business. To improve his customer services, Theo wanted to gain insight into the financial ins and outs of an organization. He was already ...