Social dialogue - part 2: up there 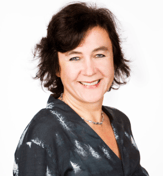 At the end of 2018, a new book by AMS professor Peggy De Prins‘Social Dialogue: opportunity or agony?’ (‘Sociale dialoog: kans of kwelling?’) will be published by ACCO. Leading up to this publication, Peggy uses everyday experiences to reflect on the content of her book.

I have a thing for the saying ‘up there’. I’ve heard it countless times from myriads of different people. According to my religious mother-in-law, God lives ‘up there’. Man tries, God decides, and that happens ‘up there’, as simple as that. To my children, ‘up there’ is where their late grandmother and grandfather live. Each time the sun shines unexpectedly, or a rainbow suddenly appears, we look up together, we wave and praise their generosity.

To a lot of employees, the bosses reside ‘up there’. Often people actually look up when they’re saying something about their superior. Regardless of whether the company building actually has an upper floor. Apparently, the subtle feeling of asymmetric power strikes a nerve in people and determines our discourse and non-verbal behavior. It symbolizes that certain things, positive, but more commonly negative, are being decided out of our power. If it’s coming from ‘up there’, we’re usually in a negative framing.

"Often people actually look up when they’re saying something about their superior."

"Within the basis of empirical evidence, we strive to welcome in our perception, the theme of symmetrical power within social dialogue."

This can be achieved through the (repeated) implicit and explicit emphasizing of our equality as conversational partners, our mutual dependence, our meeting in the middle or even: ‘our equal back-and-forth in a way the other doesn’t perceive as threatening’.

Hot topic: Feasible (or is it flexible?) work

Feasible and flexible work is high on the agenda of the minister as well as the social partners at the moment. The social dialogue is no longer only about the salary and labor conditions, but it now also focuses on the content of the work. A striking example of this is the white fury[1]. ...

Jobs of the future: death knell or opportunity?

The concept of the “Future of Work” is gaining traction, not just in academic discussions and institutions, but in enterprises and labor negotiations as well. It’s a thought that can create panic and fascination at the same time. What will the jobs of the future look like?     Many of our ...

At the end of 2018, a new book by AMS professor Peggy De Prins ‘Social Dialogue: opportunity or agony?’ (‘Sociale dialoog: kans of kwelling?’) will be published by ACCO. Leading up to this publication, Peggy uses everyday experiences to reflect on the content of her book. The terrible ...