What’s new in The Leader’s Clothes? 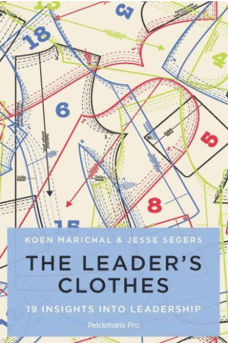 In 2013, ‘The Leader In The Mirror’ (De leider in de spiegel) was published and quickly became a bestseller for those interested in or specializing in leadership. The book’s honest approach, combined with its inspiring stories and up-to-date research, was a source of inspiration to many.

Four years later, The Leader’s Clothes is due to be published. Again, we are presented with 19 different perspectives combined with recent research and new testimonies. But just how does this book differ from its predecessor?

“All cards on the table. That takes some courage, but it will make you trustworthy.”

Compared with 2013, society is now undergoing even greater levels of disruption and transition. Trump’s election, Brexit and the refugee crisis are just some examples. In 2013, we were dealing with the aftermath of the financial crisis, but still, it seemed, we were stuck in the same old habits and power balances. 2017 feels different. Take Macron, for example, who managed to reshape the entire political landscape of France in just one year. That same feeling of transition can be found both in the economy and in government. We no longer have the same collective doubt regarding e-commerce, big data, or green energy. We are seeing more entrepreneurs and organizations in a state of transformation. Directive leadership is no longer frowned upon. In this latest book, this translates into an increased focus around entrepreneurship, innovation and courage. -Machteld Verbruggen, Thomas More.

“Hierarchy is an untenable concept to me.”

Empowerment, self-organized teams, networking organizations and versatility are more important to organizations than they were 4 years ago. The idea of a hierarchy, in which managers must supervise people, oversee results and change everything at the same time, does not exist anymore. Bureaucratic pitfalls can also be more easily avoided. The new silver bullets are “self-leadership” and “teams”. The leadership that people and teams can themselves assume should no longer be top-down. We first visited this idea in the last book, but it is now explicitly explored, as illustrated by the following quotes: “the main ingredient of leadership is the rest of the team”, “leaders are anything but prison guards”, and “leaders cut deals, not throats”. -Johan Thijs, KBC Group

“I try to be a positive influence and I try to walk that line.”

As processes become automated, rigid structures are broken down and more intelligent data is available, people-centered leadership is garnering more attention within organizations. In the end, it’s all about influencing people. How do we bring and keep people together in fragmented organizations? How do we allow independent professionals to work together virtually on a project? How do we merge innovation with operational excellence? This does not work without the driving forces of a clear aim and value. Important factors also include authenticity, connectivity, as well as credibility and expertise. The book provides us with fresh insight on these matters, stating that “leaders unload their camel” on the theme of courage, while “leaders know what they are talking about” refers to the subject of expertise. -Jef De Wit, Cronos Group

The clothes of a successful leader now are very different to those worn four years ago. As a leader or organization, regularly cleaning out your closet and changing your wardrobe are key to sustainable progress.

Leadership: a leap of faith? A sneak preview of the Ibarra Masterclass