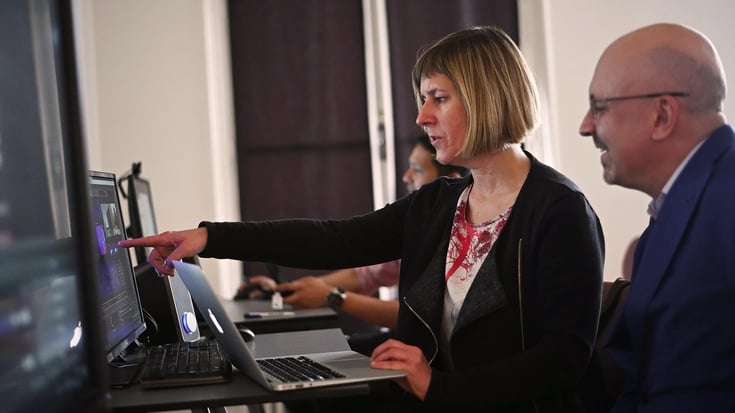 The influence of that challenging context on leadership was triggered by an incident during one of his classes at IESE Business School. “We’re having a case discussion and at a certain point in time there’s a guy who puts up his hand and says: ‘If I would be in that situation I would go straight to the HR manager and I would tell her clearly what’s wrong here.’ I invited him to do a role play and appointed a lady in the room ‘and you will be the HR manager. Have the conversation.’”

The American eloquent and intelligent young man started searching for his words, and replied in an almost insulting way. “What struck me was that he was so irritated and aggressive about it. Clearly, intelligence doesn’t say much about emotional intelligence.”

A few days later the same happened to Steven. “At the mayor’s office I was missing a paper and was sent away. I lost control over my behavior as well.” In hindsight this was quite strange, Steven said. “I can explain things; I even study emotional intelligence. But in the moment of truth, it’s easy to be a leader in times of peace, but it’s difficult to be a leader in times of war.”

"I didn’t understand why this boy was suddenly so incapable and irritated. I had to dig into emotional intelligence.”

Besides, Steven realized that he had not fulfilled his own pedagogical role in an ethical manner by putting his student on the spot. “We’re not doing a good job in business schools. We’re pretending to teach leadership to people in a classroom setting, in a peaceful situation, we’re not preparing leaders for the war, right? We’re not doing what we should be doing. Which is creating simulations, role plays for people where we can actually show, where we can actually train, where we can give them feedback so they can develop a behavioral repertoire of how to deal with situations under stress.” With this, the conceptual foundation of the NeuroTrainingLab™ was laid.

"When under stress, you don’t make conscious decisions. You’re reproducing a decision you made before, adapting it a bit to the situation."

To provide the correct training, Steven wanted to acquire more insight into emotional intelligence. When under acute stress, the limbic system gets priority and the blood flow to the prefrontal cortex is slowed down. As a consequence, making decisions is harder. “You think you are able to decide, but those aren’t active and conscious processes. It’s a routine you reproduce which isn’t necessarily adapted to the new situation you are in.” That’s an important insight for anybody who leads. “Leaders should concentrate on stress management and teaching the right routines to fall back on. Once they’re automated, they become habits which are difficult to change.”


Okay, but how do we acquire those insights? “The participant enters a normal meeting room in which they do a role play with actors. In that space, cameras and microphones are installed. Behind a one-way-mirror, there will be an observation room.” The observers have access to software which allows them to systematize their observations. “Every time something happens; a behavior, a verbalization, a nod, non-verbal behavior, a facial expression, they press the corresponding button and the software creates a timeline. That way, we collect the date in a very systematic way, second by second.” These time codes correspond with the video recordings, which are aimed at the participants’ face and torso. 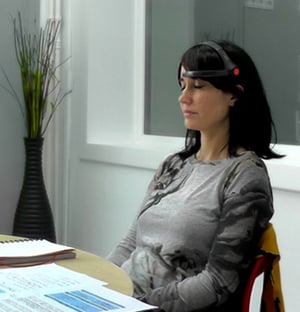 The participants receive a headset with which the activity in the prefrontal cortex is measured. “The only way to get emotional measurement is by using biometrical indicators. It’s amazing how this technology has evolved. How more and more of those variables have become simplified and we can obtain interesting and useable data.” There is also an indicator which takes the external concentration into account and measures in what degree people are taking in everything that happens around them. “This can be put out against another indicator, namely internal concentration. We look at how far people are turned inside and think about what they are going to say.”

"It’s amazing how this technology has evolved and can provide us with interesting and useable data.”

Other interesting indicators are those measuring empathy. There are biomarkers who make it possible to objectify empathy by measuring brain activity in the sensory motoric cortex. “Above that, we use traditional observation techniques. Firstly, we look at facial expressions and making eye contact. Secondly, we take the mirroring of behavior into account. Thirdly, we listen to the questions they pose to look at the verbal behavior of people and the way they want to gain information. Finally, we observe their active listening skills, like summarizing and paraphrasing. After all, you can’t summarize what people have been telling when you weren’t listening in the first place.”

Besides the numerous objective data, the actors have added value. “For it to be relevant and transferable to the workplace it needs to be as realistic as possible. So the actors are trained to work with a vocabulary of business to be able to respond in a reasonable way. They respond in function of how you treat them, it’s like a videogame.” Good actors are therefore crucial to this methodology. They are selected based on emotional sensibility. ”As soon as the exercise is over, they enter qualitative feedback on a computer, on the basis of a scale. That way, we measure the emotional impact of leadership behavior and have an extra source of information.”

"So the actors are trained to work with a vocabulary of business and respond in function of how you treat them, it’s like a videogame.”

After the exercise, they enter into a conversation with the participant to evaluate how he experienced the exercise. “That way we have information about meta-cognition. That is the capacity to take a step back, look at yourself and think about your own behavior. The only way participants can reconstruct their case in detail is when they handled very consciously. During the exercise, there’s a short break in which we can see to what degree they thought about their own behavior and what their capacity is to learn and change.”

"A good leader succeeds in changing his or her style fluently in function of different persons and situations.”

It’s not difficult to imagine how valuable this training and feedback can be. “After the exercise, you are able to provide data-based feedback supported by examples. That way, as a participant you can get started with working on your skills.” Through this way of learning, leaders learn to apply situational leadership. “The concept of situational leadership is that you need to adapt your style in function of different persons and situations. It’s not a question of being a transactional or transformational leader, it’s not a question of being autocratic or democratic, to be participative or more directive, it’s a question of being both. A good leader can switch between these paradoxical styles and has a low switching cost.” A necessary competence to be successful in a demanding context.

Learning how to be a better leader

Becoming a better leader thanks to a brain scan? It sounds futuristic, but in professor Steven Poelmans' NeuroTrainingLab it is business as usual.  The contrast is big. One minute you are walking on the creaking floorboards of the restored Antwerp manor that houses the new ...

Do you know your "switching cost" as a leader?

We’ve gotten rid of our tails, but not our emotions. With that statement Dr. Steven Poelmans, professor at Antwerp Management School and EADA Business School, started the Leadership Lab “inside a leader’s brain”. How come emotions have survived all these years? The limbic system takes ...