"The transport sector is not to blame for our traffic jams" 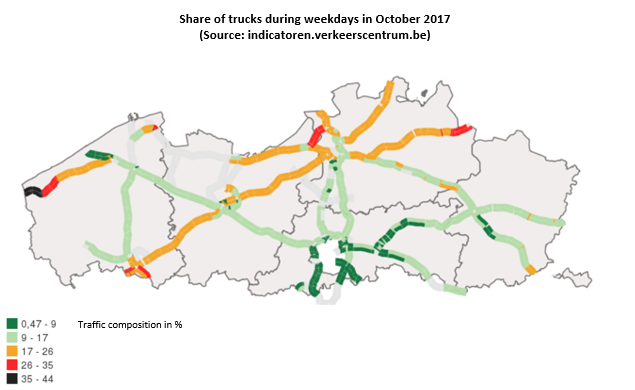 Johan Boonen, project manager Watertruck+ for the Smart Mobility Expertise Center regularly hears this statement in the world of (road)transport. Johan: “The argumentation goes along the following lines: trucks are a constant, but around rush hour, they’re joined by too many cars, which causes congestions to develop. Disperse car transport and a significant share of traffic jams would disappear.” In this blogpost, Johan analyzes this statement.

Taking into consideration the statistics of the Flemish Traffic Center, it sounds quite logical. The following map shows the average number of trucks during weekdays in October 2017 (Monday through Friday). With the exception of the R2 and its intersections (E34 to Eindhoven, E17 to Dunkirk, E40 to Lille) the share of trucks is rather limited. Even the notorious E313, with a share between 10 and 30 percent, is largely dominated by passenger cars. Not a single major artery towards Brussels has a share of trucks over 10 percent. Even when we split up the statistics according to the part of the day (midnight to noon, noon to midnight) the same trend appears. These statistics seem to support the claim of transport companies that they’re not the reason behind the traffic congestions – it’s the commuters.

Transport sector to blame for traffic after all?

With the exception of a greater share for Wednesdays and Thursdays and a smaller share for trucks on Fridays, the pattern is largely similar for both categories. What stands out is that road transport stagnates in the weekends, when most of Flanders is largely free of traffic jams. Does this mean that the reason for congestions is not road transport? If you’d spin the abovementioned reasoning, is it possible that the traffic problem would be solved if trucks only moved around during off-peak hours?

In reality, our mobility - the combination of passenger traffic and freight transport on a shared infrastructure - is directed by our customers. Nobody is happy about being stuck in traffic, transport companies least of all. Employers, schools, shippers, recipients, warehouses, dictate who and what needs to be where and when – and usually, it’s somewhere from Monday to Friday.

From that point of view, the recent argument by State Secretary for the Fight Against Social Fraud De Backer (Open-VLD) for differentiated tolls, which would make driving at night cheaper than during the day, should be considered. It’s not a bad idea, yet it isn’t enough to facilitate an actual change in behavior. To achieve that, we’re still missing too many pieces of the puzzle: flexibilization of driving and resting times, better and safe parking areas for trucks and/or trailers, a real 24-hour economy in our harbors and distribution centers. Only when the legislative and stimulating measures in this regard are in place can we start working towards cheaper off-peak hours, while transport companies try to avoid the rush hours.


Which transportation opportunities are recommended by Johan?

The rush hours on our roads have slowly become commonplace, especially in relation to the commute between work and home. What we do not realize (yet) is that the same phenomenon exists within certain leisure activities, for example with the migration of shops. This way we create a ...

END_OF_DOCUMENT_TOKEN_TO_BE_REPLACED

Covid-19 – A barrier or an accelerator of digital port transformation?

The global supply chains are affected by the Covid-19 crisis, that is a fact. There was a delayed effect until the first effects of the lockdown in China was sensed in Europe, and this effect overlapped with the European lockdown. In ports, the number of seagoing vessel calls has ...

5 reasons why startups should consider working together with traditional businesses

In today’s rat race with fast-paced changes and new technologies, startups pop up éverywhere. You can find some numbers on this fact in the blog written by my colleague Vincent Molly.    In this blog, I will approach the same topic from the opposite side: why should you, as a startup, ...