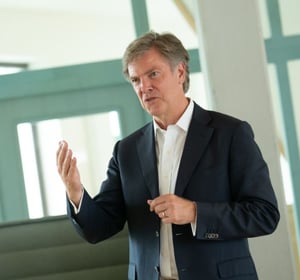 Organizations constantly change, in ways both intended and unintended. When managers deliberately set out to alter an organization, shifting it from its current state to a future state, we speak of implementing change.

The challenges involved in successfully implementing change depend on how big the intended change is – whether it is a minor adaptation or a major organizational transformation. Generally speaking, the wider the scope (the number of aspects being changed) and the larger the scale (the extent of the change), the more challenges you are likely to encounter.

This model identifies the three main categories of challenges encountered by managers trying to cross the gap between the current state and the intended future state – hence the tongue-in-cheek name, Mind the Gap Model. Within each category, three specific challenges are described that commonly occur when implementing big changes. The model does not suggest that these challenges always occur. Rather, it serves as a checklist to warn managers of the potential problems they might come across.

The nine change challenges, grouped into three sets of three, are: This blog is part of a series, if you want to see all the blogs, then click below

What determines how much confidence people have in me?   Confidence is the psychological state of feeling sure about something or someone. When people are confident, they feel certain and at ease, which allows them to move more freely and commit themselves to actions or relationships with ...