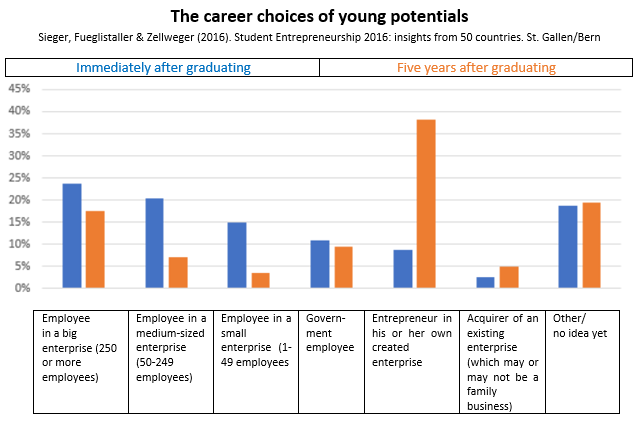 In the current war for talent, young potentials make an interesting target group for many enterprises. In this case, we are talking about recent graduates who gained the necessary basic knowledge at school and who can be shaped and trained further within the organization. But what do these millennials think about their future career, how do they face future employers and which role does entrepreneurship play in this choice?

Antwerp Management School recently studied this for you as a partner of the international GUESS consortium, in which more than 1,000 universities in 50 countries were involved. In this study, more than 122,000 students from diverse disciplines in higher education worldwide (economics, law, science, medicine, psychology, etc.) were queried about their future career choice and entrepreneurial ambitions. We gladly share with you the principal international insights.

In times when entrepreneurship is hot and trendy, we see that the overall majority of students (80.3%) still prefer a career as an employee immediately after graduating. The highest score was for students who prefer a job in a big enterprise (23.8%), closely followed by a career in a medium-sized enterprise (20.3%). A mere 14.9% of the students opts for a job in a small enterprise, which is still higher than the preference for a governmental career (10.9%).

"The overall majority of students (80.3%) still prefer a career as an employee immediately after graduating."

Furthermore, we can stipulate that 8.8% of the students indicate that they want to be active as an entrepreneur in their own enterprise after graduating. 2.6% would rather prefer to acquire an existing company, which may or may not be in the hands of family members. However, about 1 in 5 students (21.9%) reports that they are already taking the necessary steps to prepare for their own business in the future.

When we gauge the students’ future career intentions within a period of 5 years after graduating, the significance of entrepreneurship is highlighted to an even greater extent, as 38.2% of the students would then prefer to be active as an entrepreneur in their own enterprise. In other words, many students prefer to start working as an employee after graduating, and make the transition to self-employment within a period of 5 years. This pattern of “first an employee, then an entrepreneur” is generally confirmed in several countries involved in this study. See also the above-mentioned graph.

"Students whose parents are equally engaged in a self-employed activity, clearly show more interest in becoming active as an entrepreneur in the future."

You are an entrepreneur and want to gain extensive insights into the specific numbers of our country? Come to our inspiration night on December 11 about HR 4.0 at Antwerp Management School and discover what our Belgian students think about their career and the role of entrepreneurship.

Jobs of the future: death knell or opportunity?

The concept of the “Future of Work” is gaining traction, not just in academic discussions and institutions, but in enterprises and labor negotiations as well. It’s a thought that can create panic and fascination at the same time. What will the jobs of the future look like?     Many of our ...

Melexis develops and produces integrated semiconductor solutions, mainly for the automotive industry. Or as CEO Françoise Chombar puts it: “We make your car smarter, cleaner and more attractive.” Melexis thus wants to contribute to the creation of the best imaginable future. They've been ...

Thriving: The Breakthrough Movement to Regenerate Nature, Society, and the Economy

The future will be better than you think – and the reason is that there is a breakthrough movement to regenerate nature, society and the economy, and it’s gathering momentum. I call it THRIVING and I tell the positive story of this bubbling revolution in my book "THRIVING: The ...