Which moral dangers do I face while moving up the hierarchy?

A rising star is a person of above average talent who quickly makes career steps within or across organizations, filling positions of increasingly important responsibility. With this rapid move up the hierarchy comes more power, visibility and attention. On the journey up, rising stars are exposed to a variety of temptations that have the potential to morally pervert them. The more meteoric the rise, the bigger the danger of moral harm. Yet, while these challenges can trigger rising stars to become deformed, as a person they can also become more developed, depending on the learnings they draw from the experience.

The Rising Star Framework suggests that there are six hazards to which high-potentials are commonly exposed. Each of the six can be encountered independently, but they are often experienced simultaneously, mutually reinforcing each other. At the same time, each of the six threats to the rising star’s moral compass has the potential to teach her/him about the importance of a key leadership characteristic. In the model, this seed of possible learning is embedded in each of the six dangers. 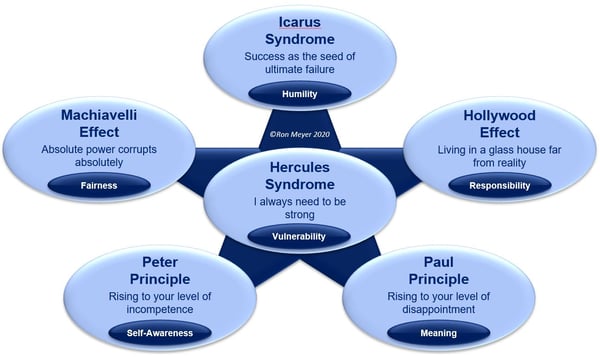 The six moral hazards are the following:

This blog is part of a series, if you want to see all the blogs, click here.

Which steps do we need to go through to develop an effective strategy? A strategy is a course of action followed by an organization to realize its purpose. In contrast to common use, strategy is not what an organization intends to do (its plan of action), but what it actually does (its ...

How can I develop strategy in a volatile, uncertain, complex and ambiguous world?   Developing strategy is about setting a course of action to achieve a particular purpose. It is about determining a route forward, while fully aware that the future can’t be predicted because the world is ...