Why public-sector professionals shouldn’t be afraid to delve deeper 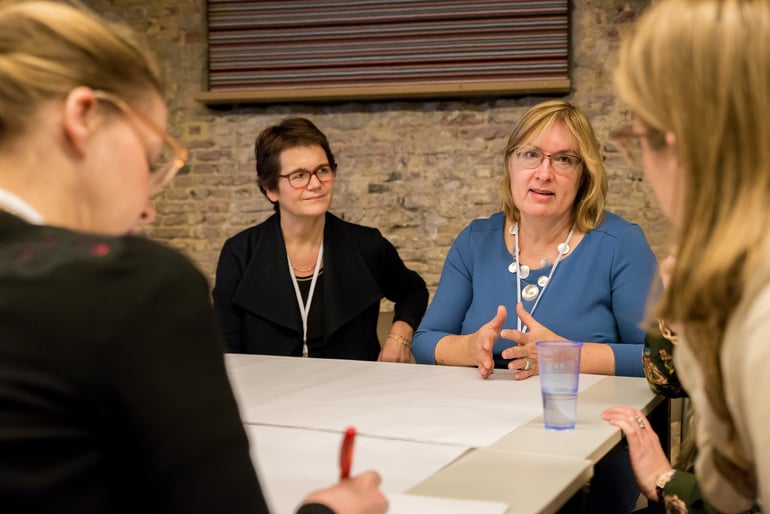 The public sector is extremely large, employing people in many different functions and organizations. But many of these professionals lack the time to make their work broader and deeper. Often, they realize that they are missing that extra bit of knowledge that would let them take their career to the next level. Antwerp Management School alumni Cindy (HR, Antwerp Police), Koen (ICT project manager for the city of Mechelen) and Sally (labor market strategy at VDAB) reflect on what the Master in Public Management – and the master thesis in particular – has taught them.

Sally enrolled on the course because she felt her original degree in criminology was no longer relevant to her work. “I was an expert in labor market information and became team leader. I felt that I needed more knowledge and insights into public-sector management.” Koen changed jobs because of a merger between Stad Mechelen and Sociaal Huis. With an extensive portfolio of IT projects, he saw the course as an extra opportunity to think “beyond the cocoon of operational IT.”

Others embark on the master because they no longer feel challenged in their job. Cindy, for example, was dealing with boredom. “With 14 years’ seniority in the federal police, it became a bit of a ‘gilded cage’ scenario. I managed an executive team that could easily function autonomously and I needed to find a new way to stimulate my mind. I started the course for myself and on precisely the same day I commenced the MPM, I got a new job offer at Antwerp Police.”

Two years of brainwork with results

As a government professional, you’re often faced with sector-specific challenges. The master thesis offered our three alumni the chance to delve deeper into a subject important to them. For her thesis, Cindy looked into the possible explanations for the low numbers of people of color within the police force, using data collected by the Antwerp Police. “I departed from literature to establish possible explanations for the fact that people with a migration background are underrepresented in the police force. These explanations were then incorporated in the assessment of the results of my own quantitative research.” In the light of the results, she can review the selection process critically – highly relevant now she’s working in the force’s HR department.

“I departed from literature to establish possible explanations for the fact that people with a migration background are underrepresented in the police force.”

Using a combination of quantitative and qualitative research, Sally wrote about social climbers – highly educated children of low-skilled parents – and how they fare in school and, later on, on the labor market. “I investigated to what extent these factors play a role in the lives of graduates and how they subsequently experience their position on the labor market.”

Koen opted for a literature review, interviews with experts and a case study in his exploratory research into determining assistive technology factors in care independence. He established that the so-called triangulation method is a very powerful way of achieving consistent data using several research methods. The results of the research provide a model and data that are useful in other domains, “especially in technological care services.” All three alumni found that their theses threw up new research themes, suggesting future research opportunities for colleagues.

Impact of the master thesis

The alumni’s development during the course was personal, first and foremost. But their research results proved useful at both the organizational and societal levels. At first, Koen was very serious about the added value he had to bring to the company with his research: He wanted to generate an immediate impact with his master thesis. But, he says, it’s important to beware of tunnel vision: “It’s through the personal process you go through that you’ll eventually be able to bring value to your practice.”

Cindy is already using the results of her master thesis within her organization to prepare to evaluate its “autonomous recruitment” project. Not only are her insights greatly appreciated in her new role, her data will also be used to conduct further research. “Now the police force is recruiting and selecting its own inspectors, these insights can prove very valuable.”

"Reflecting together doesn’t only offer you valuable feedback, but also the motivation to take your research that step further.”

All three alumni see the immediate result of their master thesis in their organization and its function in more extensive awareness-raising. For Cindy, identifying problem areas in the recruitment process is the first step toward finding a remedy. The results of Sally’s research can play a similar role. “The fact that some people can’t or daren’t assert themselves often results in underutilization on the labor market. Educators, HR managers and everyone involved in the development and deployment of competences should be aware of that mechanism.”

Cindy ended up working intensively on her master thesis over a short period of time, but she had been looking forward to going deeper for a while. “Even though it is an individual track, you’re not left to your own devices.” As well as the research models discussed in the group sessions with Bart Cambré, Koen vividly remembers the peer coaching sessions with facilitator Hans Mulder and several fellow students. “Reflecting together doesn’t only offer you valuable feedback, but also the motivation to take your research that step further. During the various group sessions, for example, I learned more than I expected,” says Koen. Sally noticed the diversity in the group from the outset and was initially concerned that the students’ contexts would be too diverse, but, she says, it “turns out you can sharpen each other’s view, making you take into consideration aspects you hadn’t thought of before. For example, which sources you use.”

By their own account, our three alumni received a lot of support from various directions throughout the course. For example, the Strategic Management topic left Cindy, Koen and Sally feeling empowered. “Throughout the course you’re offered a broad range of applicable information,” Cindy says. “I want to delve deeper into what I’ve learned and incorporate it in my own management. This is just the tip of the iceberg.”

“Now, I’m better able to comprehend certain things within my organization and that shows in my communication.”

Sally and Koen would like to develop their strategic work. Koen says he faces enough challenges managing his current portfolio of IT projects for the time being, but he looks forward to a shift toward strategic management if the opportunity presents itself. For Sally, strategic management used to be “the great unknown” she shied away from, but that’s all changed. “Now, I’m better able to comprehend certain things within my organization and that shows in my communication. I really feel excited to get to work.”

Times are changing: why health-care institutions must change their approach to crisis management

Hugo Marynissen is managing director and partner at PM Risk-Crisis-Change, a consultancy firm specializing in risk and crisis management. He is responsible for the communication modules in our Master in Public Management and our postgraduate Public & Social Profit Management program. His ...

Why public finance urgently needs a place on the agenda

For many years, Johan De Cooman has been teaching the financial management module in the Master in Public Management at AMS. With established demand from government organizations and alarming reports in the media, we recognized the need to offer some broader, deeper education in this ...