Learning how to be a better leader

Becoming a better leader thanks to a brain scan? It sounds futuristic, but in professor Steven Poelmans' NeuroTrainingLab it is business as usual. 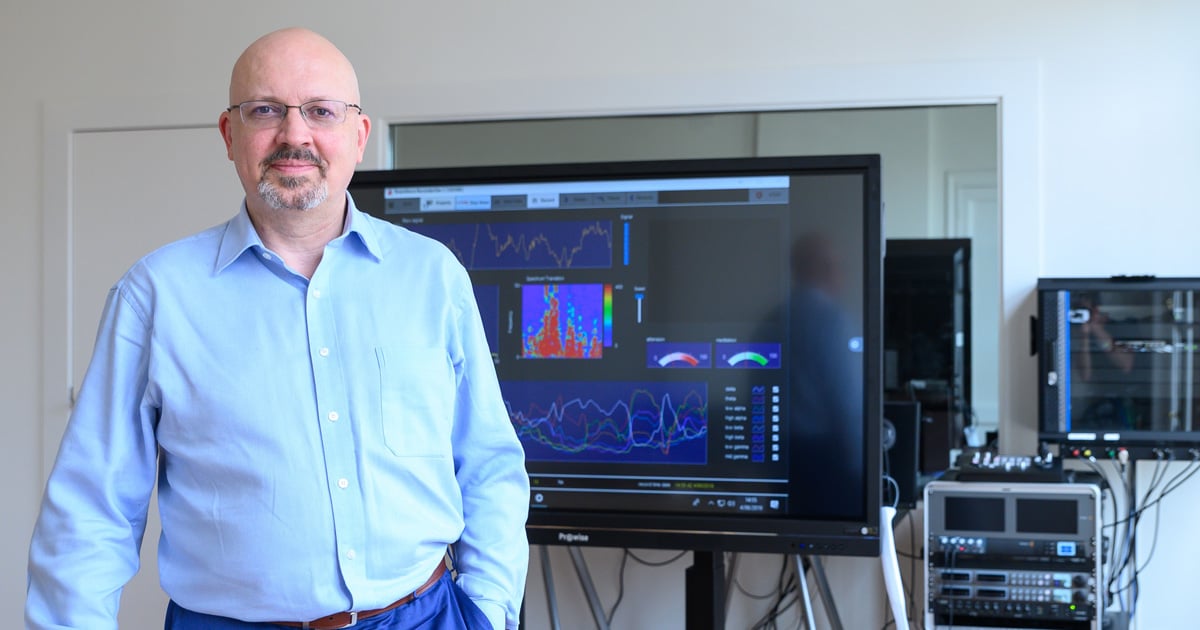 The contrast is big. One minute you are walking on the creaking floorboards of the restored Antwerp manor that houses the new Campus Boogkeers offices of Antwerp Management School. The next you are in an observation area with a few flat screen TVs, a shelf stacked with electronics and a window that turns out to be a mirror on the other side.

On the mirror side, you find yourself in a sort of meeting room equipped with cameras and microphones, where people are trained to become better leaders. The only unusual thing is that the other people in the room are actors. And that the candidates (AMS students or managers) are wearing a headset that measures the activities in their prefrontal cortex, the lobe of the brain that we use to make plans and control impulses.

It mainly revolves around that last part, says Steven Poelmans, chair holder of the Melexis Chair in Neuroscience & Technology-enabled High-Performance Organizations”. ‘It is easy to be a leader in prosperous times, but real leadership reveals itself when things get tough. Schools currently do not prepare their students enough for that. So business schools are not actually doing a good job. Supposedly, they develop leadership by discussing it in classrooms, but we do not prepare students for difficult times. Through simulations and role plays, we get a better idea of what people are capable of and they can practice a behavioral repertoire for situations in which they are under pressure.’

The NeuroTrainingLab was created to offer a solution to this issue. In the safe environment of a laboratory, actors act out real life situations to which test subjects initially respond as they usually do. Meanwhile they are being observed by scientists and monitored by machines. The feedback helps test subjects to learn from their mistakes, so they can adjust their reactions and behavior to better respond to stressful situations in the future.

But why the focus on the prefrontal cortex? Steven Poelmans: ‘In situations of acute stress, the limbic system is given priority and the blood supply to the prefrontal cortex slows down, which renders making decisions more difficult. You think you can still decide, but those are not active, conscious processes. It is a routine that you simply reproduce, which is not necessarily adapted to the situation at hand. That is an important insight for anyone in a leadership role. Leaders should concentrate on stress management and learning good routines. Because once they are automated, they become habits that are hard to change.’

Thanks to the exercises and feedback in the training lab, students and managers learn to deal differently with stress, and develop a different form of leadership, Steven Poelmans explains. ‘Based on hundreds of observations at the NeuroTrainingLab we have developed the paradox theory of leadership, which goes a step further than situational leadership. Situational leadership means that you adjust your leadership style depending on the situation or the person. We discovered that even with the same person and in the same situation, managers who switch between different styles, or 'dance between paradoxes' are more successful. For example, every good meeting has moments of consultation and participation, but also requires the manager to make firm decisions.’

In our new Master Class Business Strategy & Leadership we integrate the leadership sessions in the NeuroTrainingLab. We take it one step further than the traditional strategic programs.

Digital leadership at Board Level: learning from peers

Organizations are increasingly dependent on IT for the creation of business value. That is why boards of directors can no longer afford to delegate strategic decision making and control around IT issues. However, research shows that few boards are taking responsibility for governing ...

Are you familiar with blended learning, the buzzword of modern education? A term that sounds so cool but vague at the same time that many people wrongly associate it with new technologies or “tree-hugging” lecturers. In reality, however, blended learning is about developing curricula. At ...

Start to Lead: learning to trust your own leadership

Wannes Dierckx is a project manager at the software company JD-Consult. JD Consult is a relatively young company that has grown rapidly in a short period of time. Wannes had quite some know-how and got promoted to a leadership role. Being an expert and being a leader, however, requires a ...